Did you miss the March Resource Expo?  No worries, Arapahoe Libraries is host to the Aurora-South Metro SBDC’s Small Business Resource & Lenders Fair on Saturday, May 4th, 10AM – 12PM, at Smoky Hill Library in Centennial.

Join other entrepreneurs and visit over a dozen business resource partners who will each give a short introduction to their services. There will be speakers from the SBA Colorado District Office, and several other state and local agencies. Nonprofit lenders will be on hand to discuss their funding programs with attendees. Marcia McGilley, Executive Director of the Aurora-South Metro SBDC, will emcee the event, and there will be a brief presentation about Arapahoe Libraries’ business resources and from a local small business owner who has received benefit from these same resources. The fair is a free event; just let us know you’re coming. 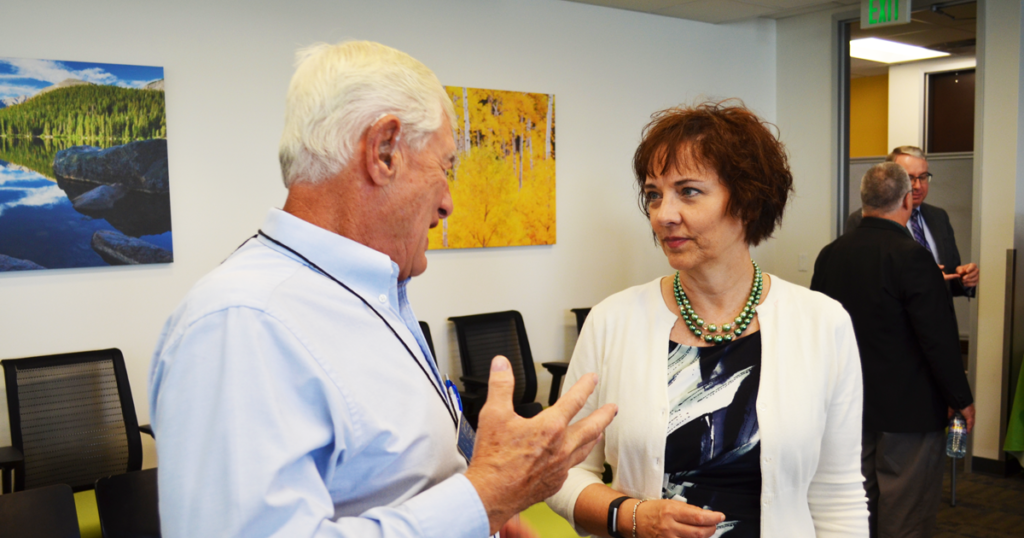 The May 5th Business Resource Fair at Arapahoe/Douglas Works was a grand conclusion to National Small Business Week.
Many thanks to Congressman Coffman and his staff for presenting this annual fair!

Above, emcee for the morning, Marcia McGilley, Executive Director of the Aurora-South Metro SBDC, talks with SCORE representative, Ken Heller.

Below are some photos of the many community partners who came out on a lovely Saturday morning to make the event possible and to inform small businesses about the many services available to help them grow and prosper!

The SBA’s Colorado District Office inducted a new business on to its Wall of Fame:  SNOOZE: An AM Eatery that had just opened its 25th location!  The owners, Jon and Adam, opened their first location at Park Avenue West and Larimer on April 2, 2006, and now has SNOOZE in four states.

Sharon King, Executive Director of the Boulder SBDC won the National SBDC Excellence & Innovation Award (as well as for the District and the State).  She is shown here on the left (in red) with Wendy McDonough of the Colorado Minority Business Office, and Wendy Wojcik, Program Manager for the Colorado SBDC Network.

Mike O’Donnell, Executive Director of Colorado Lending Source, received one of the Lender Awards from SBA’s Brian Devlin, as well as the Amy McDowell Service to Small Business award, presented by Rosy McDonough of the Colorado Minority Business Office.  The Amy McDowell Award was created by the Colorado SBDC Directors to honor those who, like Amy, dedicated their careers in support of the small business community.  Mike is shown here with Dan Nordberg, Rosy and Frances Padilla.

Marcia McGilley, Executive Director of the Aurora-South Metro SBDC, was, as host of the program at the Innovation Pavilion, was emcee of the awards program.  She is shown here with City of Centennial Council Member Kathy Turley, who handed to Marcia the City of Centennial Mayor’s proclamation for National Small Business Week.

Find out about SBA programs, loan and micro-loan programs available for small businesses through lending institutions, government contracting resources, State of Colorado and expanded SBDC services. There will be short presentation and opportunity to visit all the resource tables.  Plenty of time for Q&A!

You won’t want to miss this opportunity to learn about resources for your small business!