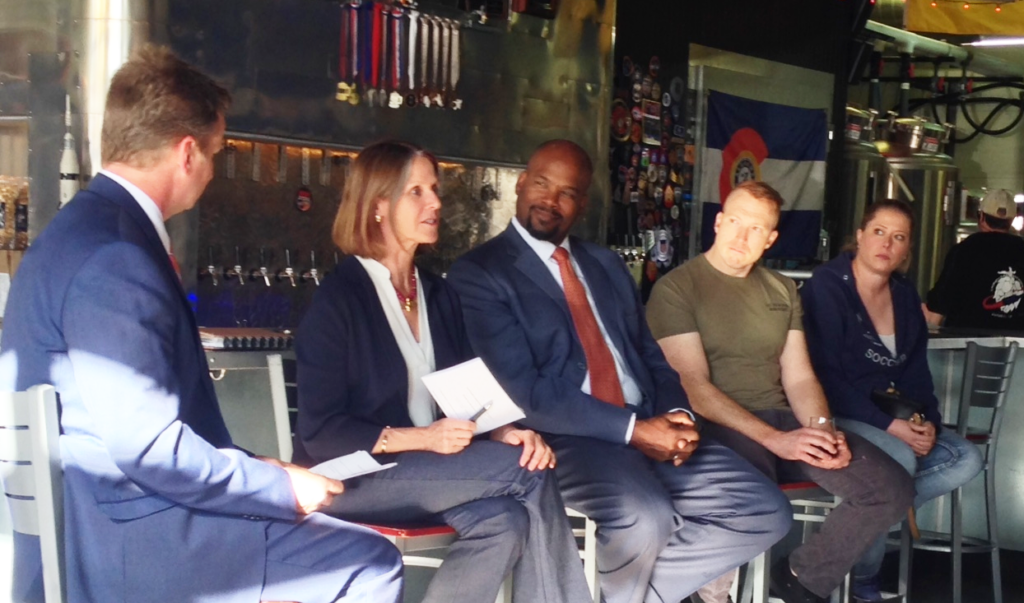 The end of an unexpectedly volatile 2020 is a great time to tell the success story about one of Aurora’s prized businesses.  David LeVesque spent about a decade perfecting his technique of home brewing with some help from The Brew Hut and visiting Colorado breweries.  The idea of opening a business location started ‘brewing’ about six years ago, and Launch Pad’s mission came together after working on the start-up’s financials over several meetings with an SBDC consultant.  A loan for working capital from Aurora’s Revolving Loan Fund also helped with the purchase of equipment, and Launch Pad Brewery was officially ‘launched’ in 2015.

The loan was quickly paid off thanks to success as a start-up.  The hard work and natural marketing prowess of Owner and Founder David Levesque, along with business partner,
Co-owner and Founder Henry Rusch, have made Launch Pad Brewery a favorite destination for locals, Buckley Air Force Base personnel and lovers of micro-brews.  Launch Pad has a unique military theme in both brews and décor.  Launch Pad is veteran-owned and operated.  Both business partners are Air Force veterans, and the staff is either active military or the spouse of a military veteran.

Expansion plans began with the help of SBA loans, through both Colorado Lending Source and Independent Bank, and a stepped-up marketing plan.  The brewery went from 2500 sq. ft. to 5800 sq. ft., increasing occupancy from 84 to 184.  They also expanded distribution to over 45 local bars and tap houses, necessarily pivoting during 2020 to reach more customers while social distancing, offering an online store for curbside and indoor pick up, as well as offering gift certificates.

The co-owners won the U.S. Small Business Administration Colorado Small Business Person of the Year Award at a soft presentation on March 27, 2020 and officially at a very small gathering on September 24, 2020 to receive the physical award at Launch Pad.  SBA’s Colorado District Director Frances Padilla, the District’s SBDC Coordinator David Benavides and Lead Lender Specialist Steve White were on hand to outline all the ways that Launch Pad has contributed to the business community with innovative outreach and consistent quality.  One of Launch Pad’s SBDC consultants, Chuck Hahn (retired), was there to not only speak highly of Launch Pad’s hard work, but to also receive the Small Business Advocate of the Year Award.

Henry Rusch has presented some of Launch Pad’s secrets of success as host to the SBA’s Veterans Small Business Week in 2018 and 2019, in conjunction with the Aurora-South Metro SBDC, the Aurora Chamber and the Veterans Outreach Center.  The educational panel has given a wealth of advice to veterans interested in growing their businesses.  The team at Launch Pad credits the SBDC, “We treasure the advice and working relationship with the SBDC.  The SBDC team, the City of Aurora and the SBA have been supportive of our business from the beginning, and we are truly grateful.”

The 2019 HIRE Vets Medallion Program is now accepting applications! Learn more and apply online at www.HIREVets.gov.
• The Award highlights companies and organizations committed to hiring and retaining America’s veterans in good, family-sustaining careers
• The HIRE Vets Medallion Award is the only federal-level veterans’ employment award that recognizes job creators
• The application deadline is April 30, 2019
• Award recipients will receive a certificate and digital images of the medallion for use as part of their marketing and promotional activities
For more information, visit www.HIREVets.gov, follow @VETS_DOL, and join the conversation using #HireVets